February was a pretty great reading month for me with 12 graphic novels, 2 audio books and a novel. 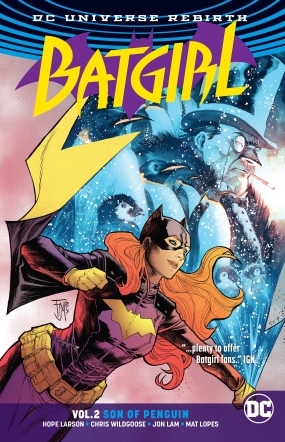 This series just keeps getting better. The plot is interesting, the characters engaging and there are so many amazing women! Also some LGBT+ representation which is pretty awesome. I quite like Nightwing and Batgirl together and I loved the Supergirl arc! I can’t wait to read more about Batgirl. 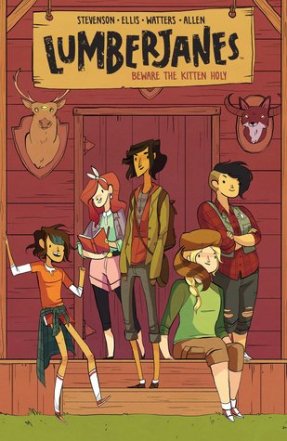 While it had its moments, I was generally underwhelmed by this graphic novel.

Two of the characters have a crush on each other, which was pretty cute, and some stereotypes were subverted, which was cool. The friendship element was also very good.

I found their near constant use of “what the junk?” slightly irritating and the use of badges from their field guides, while useful in breaking up the narrative, slightly tedious.

The Incredible Adventures of Cinnamon Girl

Funny, emotional and real, The Incredible Adventures of Cinnamon Girl is a brilliant story with one of the best endings I’ve come across to date.

Though it took me a while to really get into it, once I passed the 150 page mark I laughed out loud, cried my eyes out and found myself incredibly invested in these characters and their lives.

A solid read. While not as good as the Rebirth titles, this was enjoyable and I’m really liking getting to know Batgirl. I love the friendships, the strong women and learning about Babs’ backstory. Frankie and Black Canary were particularly interesting characters. I can’t wait to read the rest of Batgirl’s New 52 arc.

An interesting read, that left me intrigued to see how Nightwing’s arc plays out.

Nightwing: Back to Blüdhaven (Nightwing: Rebirth #2)

Another interesting read, though admittedly I didn’t quite get all the references – particularly to the alternate universe things. However, I appreciated the moral ambiguity and the relationship was very cute.

My favourite volume so far, I loved this instalment of Nightwing’s story arc. I laughed, I cried, and I was deeply satisfied. I loved the cameos and the character development. Definitely recommend checking this series out.

I really enjoyed this look at Batgirl – her past, her present, her relationships, her suffering. She’s flawed, has panic attacks and was in a wheelchair for three years. She struggles and she suffers, but she gets through it. I particularly liked seeing the beginning of her relationship with Alysia, though I have no idea what to think of Barbara’s unexpected visitor.

This was ridiculously good. Not only did we get Batgirl’s origin story, but Knightfall Descends features complex characters, an engaging plot, plot twists, character development and was just a brilliant time. The cameo from Dinah was also excellent.

Batgirl is my kind of hero – she became her own white knight and wins the day because she’s clever and determined.

This was a pretty great volume. Everything with James… that was interesting, to say the least. The revelation about Alysia only made me me love her more. And the ending? Excellent.

However, I do have one main gripe: the issue with Batman and the Joker was extremely confusing in terms of timeline as well as what was actually going on.

“Wait for a hero?

Barbara James Gordon– be your own damn hero.”

Probably the best volume of Batgirl’s New 52 run, Wanted was a great, engaging read that left me wanting more. 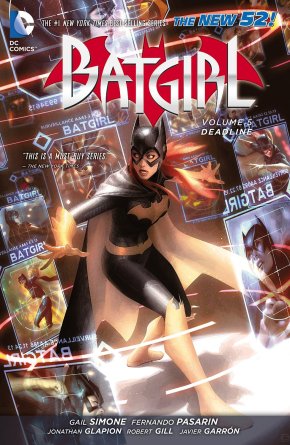 Honestly? While the big team up was great, overall Deadline was a disappointment – particularly the ending. At times I also found it a bit confusing.

A fantastic, engaging read full of girl power and awesomeness.

No matter how many times I read this story, I fall in love with it every time.

I’d forgotten how amazing Illuminae was, and the audio format made it even more so. With a full cast, sound effects and some excellent directing/production choices, the audio (and story) had me hooked.

Due to the format, the audiobook was unable to include the visual aspects of the original text. I do not believe this negatively affected the story.

The voices of the Illuminae Group and, later, the afflicted were downright eerie and creepy respectively, and the accents and inflections behind the entire cast’s performances were brilliant. Overall, the high production quality coupled with amazing source material made for an excellent reading experience.

Even better the second time around, Gemina is another brilliant instalment to The Illuminae Files. This time I listened to the audio book, which was a great decision. With excellent voice acting, sound effects, accents and production choices coupled with an already amazing story and authentic characters, the audio production of Gemina is one not to be missed.

How was your February?

Have you read any of the books I mentioned? If so, what are your thoughts on them?

Did you discover any new favourites? Books, movies, TV shows…?