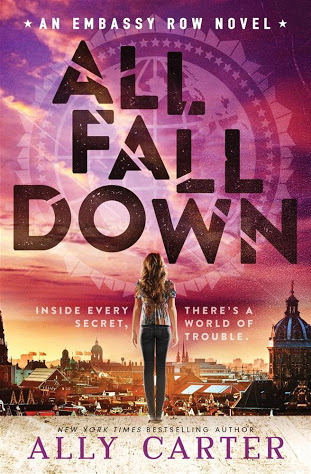 This exciting new series from New York Times bestselling author Ally Carter focuses on Grace, who can best be described as a daredevil, an Army brat, and a rebel. She is also the only granddaughter of perhaps the most powerful ambassador in the world, and Grace has spent every summer of her childhood running across the roofs of Embassy Row.

Now, at age sixteen, she’s come back to stay–in order to solve the mystery of her mother’s death. In the process, she uncovers an international conspiracy of unsettling proportions, and must choose her friends and watch her foes carefully if she and the world are to be saved.

All Fall Down is Ally Carter’s newest release and the first book in her new mystery series which takes place in Adria, a small European country that stands as a meeting point for countries of the world. Adria has a rich history and a beautiful landscape which I absolutely loved learning about. Embassy Row is one such feature – it lies on the outer ring of the country and, as befitting its name, consists of a multitude of embassies representing places all over the world. Russia, Israel, Germany, Brazil, Canada and the USA are only a small sample of the countries situated on Embassy Row.

Containing brilliant, relatable characters, major plot twists and a cliffhanger that will leave you wanting for more, All Fall Down is an enthralling page turner and completely realistic, despite Carter inserting an entirely new country into the modern world. Furthermore, Grace is an unreliable narrator, which made the story even more compelling. She has brief flashbacks all throughout the novel to the night of her mother’s murder, but it is only at the very end that we discover what really happened.

I recommend this book to people looking for a YA mystery that reads like a contemporary but isn’t. The characters are extremely well fleshed out and Adria itself is just so interesting and beautiful. I am definitely looking forward to the next book in this series and delving into Ally’s other works (particularly Heist Society).