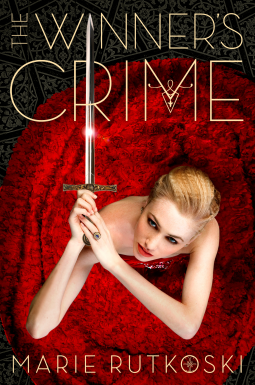 Lady Kestrel’s engagement to Valoria’s crown prince calls for great celebration: balls and performances, fireworks and revelry. But to Kestrel it means a cage of her own making. Embedded in the imperial court as a spy, she lives and breathes deceit and cannot confide in the one person she really longs to trust …

While Arin fights to keep his country’s freedom from the hands of his enemy, he suspects that Kestrel knows more than she shows. As Kestrel comes closer to uncovering a shocking secret, it might not be a dagger in the dark that cuts him open, but the truth.

Lies will come undone, and Kestrel and Arin learn just how much their crimes will cost them in this second book in the breathtaking Winner’s trilogy.

I was warned, but nothing – nothing – could have prepared me for the beautiful torture that is Marie Rutkoski’s Winner’s Crime. I just – I can’t. The worse part is, I allowed myself to hope.

A lot of people argue that this installment is Marie’s best yet – and I would be inclined to agree. However, don’t go into it expecting rainbows, butterflies and fun times. Because if you are… well, let’s just say that you are in for a huge surprise.

The Winner’s Crime is full of secrets, lies, tension, politics, high society, betrayal, intrigue, espionage and a whole lot of emotional manipulation. There will be tears, frustration, yelling at the characters to just get over themselves and hurt when others turn out not to be who you thought they were. This novel will have you on the edge of your seat, will make you hope and then crush that hope into a thousand pieces.

Don’t say I didn’t warn you. Now go and pick it up anyway because you do not want to miss out on this spectacular ride.

Thank you so much to Bloomsbury Publishing for approving my request for this book on NetGallery in exchange for an honest review. This copy of “The Winner’s Curse” is actually an ARC, but unfortunately I did not get around to reading it before the release date.